The Prayer of Jabez was popularized in a book by that name that came out about 8 years ago and sold millions of copies, promising prosperity, etc if you just recite it.  There probably weren’t millions of instant millionaires as a result, because the universe doesn’t work that way and neither does that specific prayer.

The prayer is useful in certain circumstances, which is why we’re 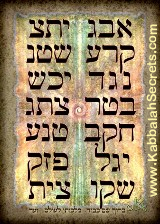 explaining it today. Meanwhile, the most powerful prayer (meditation) we’ve been given for prosperity and for everything else for that matter is the Ana B’koach (42-Letter Name of God) and that one is designed to work with us, to help us when we are putting in the effort, not as a replacement for our effort.

“And Yaavetz called to the G-d of Israel, saying, ‘If You bless me and increase my border, and Your hand is with me that You save me from harm, so as not to sadden [eitzev] me…'” (1 Chronicles 4:10)

To understand how this prayer works, what it does and why, we

need the help and explanations of the Arizal, who takes us through the various incarnations of Moses’ brother, Aaron, the only person the Torah associates with the term Moshiach (anointed one). We will only examine the relevant window on those important incarnations that stretch from Abel to Haran (Abraham’s brother) to Elijah, but please explore the rest on your own in the Gates of Reincarnation, Shaar HaPesukim; which was subsequently published in “Apples From the Orchard.”

Please note that prior to being reincarnated as Aaron, this illustrious soul was killed in the body as Haran, by the fires that spared Abraham, whose belief in God was unwavering. Please note further that it was Haran was the progenitor of all the Matriarchs from Sarah to Rebeca (Rivka) to Rachel and Leah and to Ruth, King David and Mashiach, the Messiah.

The following quote from the Arizal refers to the time just after the golden calf incident:

Therefore it is written (Deut. 9:20), “And G-d was angry at Aaron, and sought to wipe him out,” and death was decreed on his sons. As it is written, “And intended to wipe them out, were it not that Moses, His chosen, [stood before Him in the breech to return His wrath from destroying].” (Psalms 106:23) Nonetheless, “returning wrath” implies that the wrath had already had some effect, and this was indeed the case here.

Our sages state (Vayikra Rabba 10:5) that “‘wiping out’ implies destroying progeny,” and Moses’ prayers turned back half of the decree. Thus, of Aaron’s four sons, Elazar and Itamar remained, and only Nadav and Avihu died. Our sages point out that this is the meaning of the verse “And [Moses] became angry at Elazar and Itamar, [Aaron’s] remaining sons.” (Lev. 10:17)

The reason why specifically Nadav and Avihu died is that they, too, sinned with respect to foreign fire.

Aaron had to make amends (correct his tikun established in the life as Haran) for not submitting himself unwaveringly as had Abraham to the flames. During the incident of the golden calf Aaron could have done this by refusing to help the Erev Rav as his nephew Hur had.  Hur was killed because of said refusal. The lesson here is that regardless of what we think we know, we must belief that God knows more and has the best intentions for us and not to waver in those beliefs

The combination of both [their own sin and their father’s] caused their death, and thus G-d’s wrath found its place to rest. In the case of Elazar and Itamar, however, who did not sin, Moses’ prayer was effective.

After Aaron died he was reincarnated as Yaavetz, who is mentioned in the book of Chronicles (1 2:55). The reason why he was called this is because the curse of Eve was “in sadness shall you bear children,” (Gen. 3:16) and that of Adam was “in sadness shall you eat it.” (Gen.3:17) In the Zohar 2:219b it is said that the phrase “in sadness shall you bear children” is the mystical meaning of “sin crouches at the door,” (Gen. 4:7), referring to the shells [kelipot, negativity] of the world of Asiya, which are called “sadness” and “sin that crouches at the door.” And it is known that the kelipot have dominion only in the world of Asiya.

The Arizal is alluding to the fact that the name Yaavetz (yud-ayin-beit-tzadik) includes the letters that compose the word for “sadness” (eitzev, ayin-tzadik-beit).

As we have explained elsewhere, Nadav and Avihu were the aspect of nefesh of the soul of Adam. This sadness ruled over them, and they therefore died in the sin of their father, Aaron.

Therefore Yaavetz prayed: “And Yaavetz called to the G-d of Israel, saying, ‘If You bless me and increase my border, and Your hand is with me that You save me from harm, so as not to sadden [eitzev] me…'” (1 Chronicles 4:10) In other words, he prayed that his sons should no longer die in his lifetime, as they had when he had been incarnated as Aaron [and Haran]. [The verse continues:] “…and God fulfilled that which he had requested.” His children and students endured, as our sages have pointed out. For this reason he was called Yaavetz. (Mishnah Temurah 16a)

So what does the prayer of Yaavetz (Jabez) have to do with prosperity? Nothing. It is a powerful prayer to help your children. And when Aaron recited it incarnated as Yaavetz he was helping us and helping to bring about Moshiach for us.

When we can recite it, especially in Hebrew, we can do so as Yaavetz had: “he prayed that his sons should no longer die in his lifetime.”

If you think your children are in danger, or are ill, please do everything you can physically to help them and also ask G-d’s help through this prayer (above). “…and God fulfilled that which he had requested.” His children and students endured”

Use this prayer to help protect your unborn children as well.  G-d has given us the tools.  Just as the Ana B’koach used properly can help you to conceive (as explained in The Genesis Prayer), this prayer can help you keep your children safe.

One caveat that the Ari explains happened to Yaavetz and in so doing warns us not to do, is to make vows. These will not help your situation–the steadfast belief in G-d’s knowing best and His ability to help you help yourself will.  Vows will just add to your tikun as you’ll eventually have to fulfill them.

B’H, May G-d bless all our children.