In parsha Vayigash, 46:28 it says [Jacob] sent Judah ahead of him to make preparations in 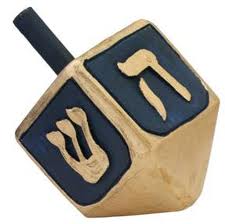 Goshen (Goshnah).” Goshen (Goshnah) has the same 4 letters as the Chanukah dreidel, and likewise they add up to 358, the numerical value of Moshiach, the Messiah. This is the area within Egypt (or really outside it) that Joseph arranged for his family and the Israelites to live in exile. The name Goshen (גֹּשְׁנָה Goshnah) is only found twice in the Torah and hints at the two Mashiachs, Mashiach Ben Yosef and Mashiach Ben David, connected to Joseph and Judah respectively. By Joseph reuniting with Jacob, the spirit of Mashiach was restored, and the flow of mazal through Joseph could go to the Israelites, instead of the Egyptians who had been the previous beneficiaries.

The Torah is also telling us that the spirit of Mashiach can be anywhere, even in the darkness of Egypt if we stay connected to the source of the Light, which is a message we need to hear now, more than ever. Nevertheless, with Goshen(גֹּשְׁנָה GShNH), the Torah is also spelling out the travels of the Mishkan (the Tabernacle) and the Ark of the Covenant, whose final home was prepared by King David in the Holy Temple in Jerusalem: G for Givon; Sh for Shilo; and N for Nov.

While, it could be said that 3 letters of the Goshen(גֹּשְׁנָ GShN) adequately represent the 3 locations of the Mishkan, but the H of Goshna (GShNH) could stand for the 5 Books of Moses, since the 4th stop of the Ark of the Covenant was with King David in Jerusalem and King David was born 616 years after Jacob and his family moved to Goshen, and 616 is the numerical value of “H’Torah (the Torah).” 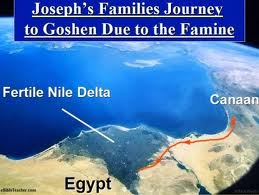 pointing us toward Mashiach. And the dreidel only spells out numerically Mashiach (גֹּשְׁנָה) outside of Israel. Inside Israel the letter Pe, for Po, here, is substituted for the Shin, just as Goshen is also outside Israel, in the land of exile.

The second instance Goshen is spelled (גֹּשְׁנָה Goshnah) is in the mystically important verse Bereshit 46:29 “Joseph harnessed his chariot and he went to greet his father in Goshen.” According to the Zohar, the word for chariot used here is merkava, as in the the chariot, or vehicle of divine revelation, described in Ezekiel’s famous prophetic vision (Ezekiel 1).

The Zohar goes on to explain that what Joseph harnessed was the various levels of his soul and he thus ascended to the level of Zeir Anpin of Atzilut (the highest level) and communed  with the Divine Presence, referred to in the verse as his father, Israel.” In Ezekiel’s vision, He was referred to as “the likeness of a man.”

Obviously, Goshen was a very special place, where the Israelite population would explode from 70 to 600,000 in preparation for the reception of the Torah and the Tree-of-Life and the fulfillment of the Covenant of Abraham (the Covenant of Halves) as God reiterated to Jacob earlier in the portion (Vayigash). With the kolel of 1 the initials of the verse total 107, and as we know, the sum of the integers through 107 is 5778, the year (2018 ce) Rav Ashalag and the tzaddikim prophesied for the final redemption (geula) and Moshiach.

We know the tie in to Moshiach is beyond dispute, but as for the intent to point to 5778 (2018 ce) we need further proof. Mirroring the ascention of Joseph to meet the Divine presence in the first verse of this chapter, “God spoke to Jacob in a night vision and said, “Jacob Jacob.” While the gematria of these double words less the kolel of 1 is 363 that of “H’Mashiach (The Messiah),” what these double words do is connect with the other set of double words, earlier in the portion at Bereshit 44:28: Tarof Toraf (TtRP TtRP).

And the secret of these double words is that they add up to 2018 in gematria sofit or 578 in simple gematria. Now, as regarding the mysterious double words, the Covenant of Halves, and the connection to King David mentioned earlier, half of period from Adam to Moshiach in 5778 is 2889, which is exactly midway through the 70 year life of King David.

To be continued with the the secrets behind the 70 Israelites who moved to Goshen.